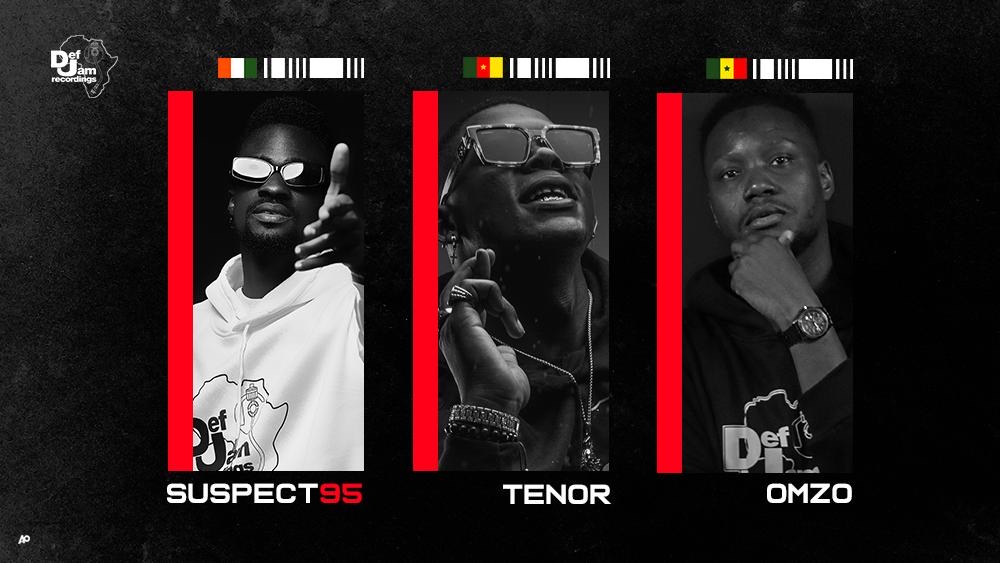 Def Jam Africa launched in May 2020, as the first label dedicated to representing the best hip-hop, Afrobeats and trap talent in Africa, and follows the blueprint of the iconic Def Jam Recordings label, which has led and influenced the cutting-edge in hip-hop and urban culture for more than 35 years.

Def Jam Africa will now have additional A&R, marketing and digital resources based within UMG’s offices in Abidjan (Côte d’Ivoire), Dakar (Senegal) and Douala (Cameroon), dedicated to discovering hip-hop talent across all French-speaking African markets and will operate under the leadership of Franck Kacou, Directeur Général, Universal Music Africa.

In making the announcement, Franck Kacou said, “We are excited to launch Def Jam Africa in Côte d’Ivoire, Senegal and Cameroon with three of Africa’s most exciting hip-hop artists; Tenor, Suspect 95 and Omzo Dollar. There is a wealth of domestic hip-hop talent here and in the surrounding countries, that has the potential to transcend language and geographical boundaries to appeal to audiences throughout Africa, France and beyond. I look forward to working alongside Sipho to expand our community of artists across the continent, and to help elevate hip-hop from Africa to new heights.

Jeff Harleston, interim Chairman & CEO, Def Jam Recordings said, “The reaction to the recent launch of Def Jam Africa showed the weight and respect that the Def Jam name and brand carries globally. We are excited to welcome these new markets to the Def Jam Family. It provides an important opportunity for audiences worldwide to discover the incredibly talented hip-hop artists emerging throughout the continent.”

Olivier Nusse, Chairman & CEO, Universal Music France said, “African hip-hop is one of the most exciting movements in music today. In recent years we have seen an increase in its popularity in France, but the appetite for African hip-hop continues to grow amongst audiences around the world. We are excited to further expand Def Jam Africa into Cameroon, Senegal and Côte d’Ivoire, and for these incredible artists to help build Def Jam Africa into the authentic and collaborative home of hip-hop across all of Africa.”