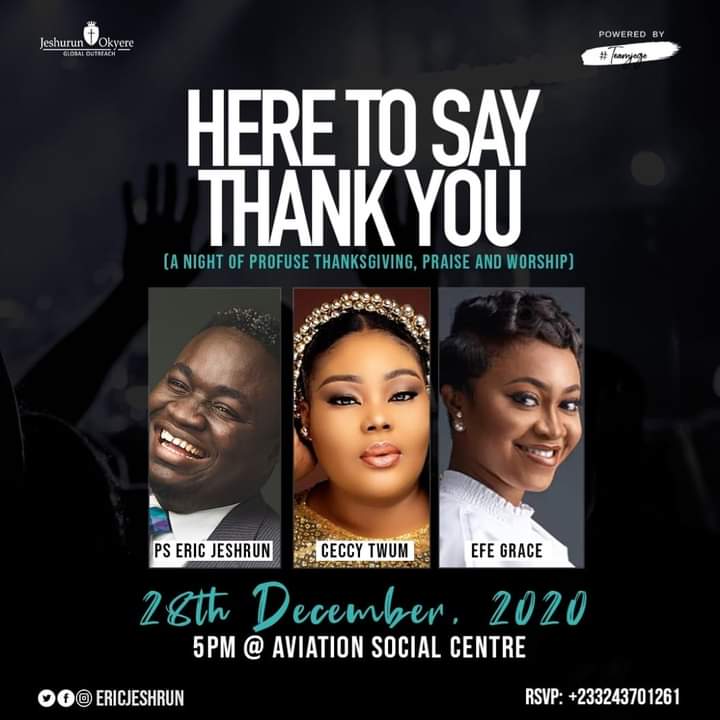 As part of efforts to show appreciation for the support of fans and industry players through out the year, Ghanaian gospel music dynamo, Eric Jeshrun is set to enthrall patrons in a “Thank You” concert

The concert with the theme,”Here To Say Thank You,” is earmarked to take place at the Aviation Social Centre in Accra on December 28, at 7pm.

“This is our way of saying thank you to God after a tough year. The thanks also goes to my fans, and all those who have contributed to the success of the Healing Stream album,” he said.

Eric Jeshrun further added that the event will serve as an anointed ushering into 2021.

Ministrel with anointing-filled voice, Cece Twum, and sensational Efe Grace will be in their element at the night of profuse Thanksgiving and worship.

Eric Jeshrun, did not allow the difficulties in the year to overshadow his gift, but released an awe-inspiring album, dubbed Healing Stream made up of 10 songs which featured other gospel heavyweights like Nathaniel Bassey, Joe Mettle, Blessing Ohanele, Efe Grace, and Kingsley Ampofo.

Other songs on the album include ‘You Reign’, ‘Healing Stream’, ‘Chant of Healing’, ‘Nyankopon’, ‘Onyeoma’, ‘Satisfy’, ‘Yahweh’, ‘Mama’s Song’, among others.

The album is available on all digital music stores around the world.

Additionally in the year under review, he staged an amazing virtual August Worship concert, moderated MTN Stands In Worship, enthralled patrons at Adom Praiz, and dazzled at Sing Over Ghana concert among many others.