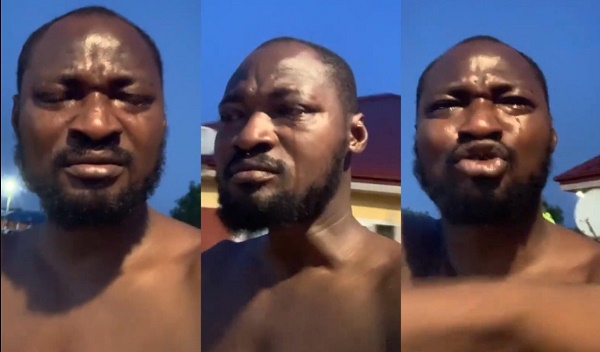 Ghanaian comedian, Funny Face has publicly shared how he’s dealing with his current phase of depression a few months after he came out of rehab.

Last night the actor was seen ranting in the middle of a highway in Kumasi in a video he shared on social media and called on his fans to pray for him.
He captioned the video: “AY3KA depression has finally finished me. GYE NYAME. I don’t think I can survive dis one .. 7th depression.. hmmm”.
#FunnyFans @funnyfansofficial pls pls pray for me .. dis is too painful .. Aaoo everybody is getting a woman .. yaw Boateng.. go take woman Aaah .. you go take cobra … thinking she would love you? Hmmm, dis time revelations Are too much !!! Ryt Infront of ur eyes .. YAW BOATENG choose live and live ooo yooo”.

However in a new video, Funny Face has been spotted with two military military officers and according to him, they came to his rescue after his suicidal attempt. “They saw me walking by the roadside after I dodged death yesterday, I have had depression again,” the actor said in the video.

In the video below, the actor who was speaking with tears said: “I am tired, I am tired, herhh” with the military officers consoling him that “chale e go bee”. The officers later decided to offer Funny Face, who was walking by the roadside, a lift.

Talking about his Baby Mama, he added that “NANA YAW ODURO BOATENG OHENE BENSON RICHMOND Hmmmm JEHOVAH.. pls hold my heart and lips .. for dis is too much for me .. or the secrets and names which are abt to drop will shake GHANA”.

my #ELLAandBELLA my baby KIMBERLYN .. DADDY loves you with all his heart

.. but how things are going at da expense of my life for the 7th time”.

Our prayers and thoughts are with Funny Face during these difficult times.