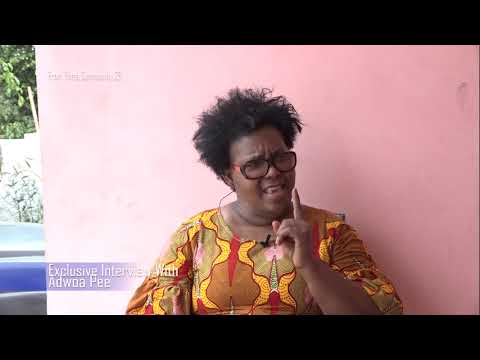 Actress Adowa Pee who is famed for her role in the popular Sunday Cantata drama on GTV has been hit with a health condition she is struggling to manage and has publicly called for help.
The actress disclosed in an interview with OBININI TV on Youtube shared how she has been struggling over the years.

“I have been sick for about three years, when I solve this problem another one emerges. It started with kidney stones and I went through the process at Korle Bu but I have been silent about it”
According to Adowa Pee who is also famed for her role in the popular Sunday Cantata drama on GTV, her health condition has been draining her. “Within these three years, I have slept at the hospital forty-one times,” she said.

Adowa Pee revealed that she is now battling spondylosis. “It’s been a year. I feel pains all over my body. I’m told I have to undergo surgery,” she said, and that it comes with a cost she can’t afford, therefore she is pleading for help.

“In America, we are looking at between sixty thousand and one hundred and ten thousand dollars. (USD60,000 – USD110,000). I beg you; I need help. I have a problem. I’m telling you now that I have a problem so, please come to my aid so I’ll have the amount for the surgery and get healed”, the actress pleaded.

Detailing the suffering she’s going through, she said “sometimes, I wish I just go to sleep and I’ll not wake up”.

Hear her speak in the gut-wrenching interview below.