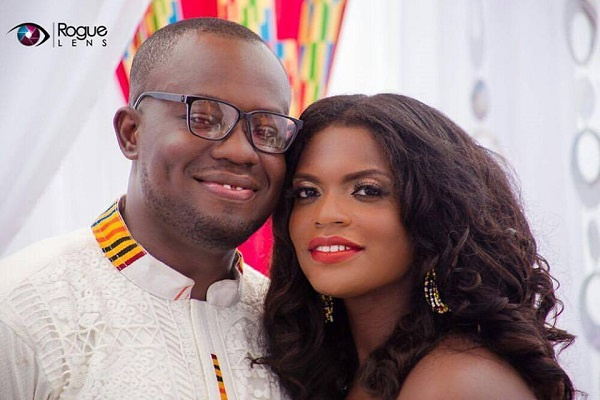 Ghanaian television personality, Giovani Caleb, host of “Date rush” on Tv3, in an interview with Delay, revealed how he met his wife ( Belinda), and how the attraction was, the very first time they met.

According to Giovani, it was love at first for both of them (He and his wife), when she ( then a stranger) walked into his work place to make enquiry.

Giovani said upon receiving her, her amazing accent in speaking alone was catchy, so he asked his other work colleagues to allow him assist her, and act as the manager for that moment.

He added that after interaction with her, they took some pictures together, and from then, they took their relationship further.

Delay queried if his decision to marrying his wife was motivated by her money. Giovani responded by revealing that his wife’s breast is that one thing that pushed him into marrying her, and not her money, because he’s someone who is crazy about women breast.

“…..In fact, the reason why I married her is because of her breast… that was the first thing when we started. She’s someone who thinks deep. She’s changed my perception about life, and my brand in so many ways” he said.