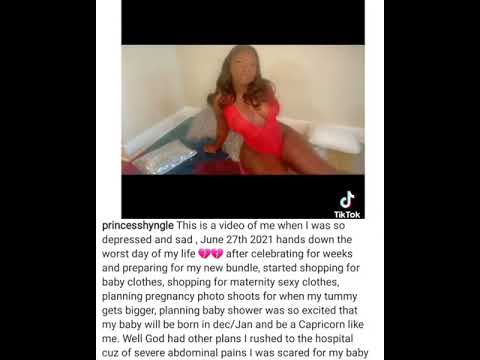 Princess Shyngle has revealed that she would have been about 7 months pregnant now had she not lost her baby.

According to the Gambian actress, she had to surgically remove her baby because it was an ectopic pregnancy.

Shyngle said she was exceptionally happy when she found out she was pregnant. She bought maternity clothes and started planning a photoshoot and also a baby shower. She also said she was truly excited because the baby was supposed to be born around December/January.

However on the 27th of June she began to feel serious abdominal pain and was rushed to the hospital to seek medical help, when she got there, the doctor examined her and found out she had an ectopic pregnancy.

The actress was told that she had to be operated on immediately or she would suffer from internal bleeding which would eventually lead to her death.

She called her mother and they both wept over the unfortunate incident after which she prayed for her.

Shyngle woke up the next day from her surgery and said she was in great pain. After moping around for some days she decided to wear lingerie and snap some pictures and make a video.

The actress said she was putting her story out there to uplift anyone going through a difficult time.