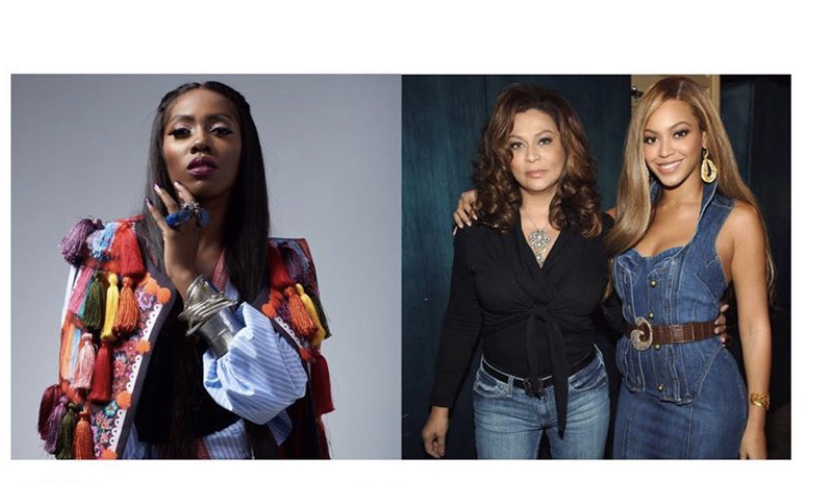 Mother of American Singer Beyonce, Tina Lawson has called Nigerian Afro-beats singer, Tiwa Savage out for implying that her daughter has been silent on the protests going on in Nigeria.

Over the last few weeks, Nigerian youth took to the streets to protest against police brutality (#ENDSARS).

While so many celebrities in the international community were tweeting and showing their support to their Nigerian fans, there was no message from Beyonce or her team.

Tiwa Savage, who has worked with Beyonce in the past on her ‘Black is King’ album, in an Instagram live video, pleaded with Beyonce and her team to throw their weight behind the movement.

“I’m calling on Beyonce and her team. The same way they used their platform, I’m so grateful for that. The same way they used their platform to elevate and to show the world that ‘Black is king’ and how beautiful Afro-beats  and Africa and our culture is, I want them to please use their voice and their platform now because the same country that birthed this genre is on fire right now. Where these creatives are from is on fire, so I;’m calling on Beyonce and the whole team and I’m telling them you cannot ignore this, you cannot be quiet,” she said in the video.

Tiwa’s statements however, did not sit well with Ms Tina as she has called out Tiwa and many other people who were calling out Beyonce for staying silent on the issue.

According to Ms Tina, Tiwa is in close contact with Beyonce’s team and could have addressed them directly instead of taking to social media to do so.

“Someone that was on the last project who BTW is in constant contact with her team decided that instead of contacting her team and asking her to post to assist in speaking the word. I am appalled that they would get on social media and do it!!” She wrote in a long post on Instagram.

She also added; “no matter what her daughter Beyonce does, she is scrutinised and torn apart.”

“We all have mothers oo.”