Watch: I was lured to Zylofon FM with a salary of GHC 10,000 and a brand new Mitsubishi Pajero- Blakk Rasta 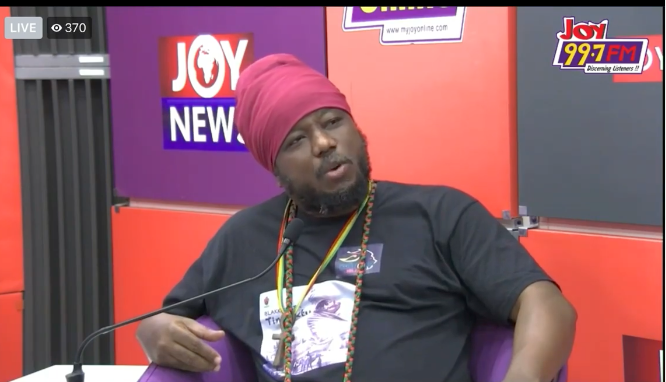 On-Air Personality and Reggae musician, Blakk Rasta has revealed that he was lured to Zylofon FM from Joy FM with a mouth watering salary of GHC 10,000.

The host of “Taxi Drive Show” on Zylofon FM in a recent interview on Joy FM revealed that when Nana Appiah Mensah was setting up Zylofon FM and recruiting presenters for the station, he was one of the few people who were contacted.

According to him, he wasn’t contacted directly by Nana Appiah Mensah, but through Sammy Flex, another employee on Zylofon FM.

Speaking in the interview, Blakk Rasta revealed that when he asked for GHC 10,000 salary, he was shocked that NAM 1 was ready to pay him the said amount.

“‘We are building a radio station, are you interested?’ I said ‘certainly, I’m interested’. He said ‘well, what would you need? Of course, at that time, I had already put it in the media that any radio station that was interested in me must pay me a salary of GHC10,000. And the people who criticised me were the same presenters – who said it was too lofty and I was becoming unbecoming,” he revealed.

“So, Nana Appiah Mensah spoke to Sammy (Flex) – I never spoke to Nana Appiah. I told Sammy that I wanted GHC10,000 and this and that. Then, surprisingly, the man asked what kind of car I wanted. I was shocked. And I don’t know cars. Honestly, all I said was that I need that big car called 4×4…so, he gave me a 4×4 (Mitsubishi Pajero). That was the first time I drove a brand-new car. All the other cars I drove were from Kantamanto or somewhere else,” he added.

Blakk Rasta however revealed that his days of receiving the hefty salary were shortlived after 4 months when the Menzgold scandal happened.

“It was an exciting (feeling) because I felt quite accomplished and I felt that I had to come back on the radio to do the magic. So, that’s how I met Nana Appiah Mensah. Fortunately, the salary came in the first, second, and the third month. The fourth month never came. For 12 months in a row, no salary came because of the MenzGold scandal,” he stated.

Blakk Rasta, recently ‘escaped’ death after an alleged attack on his life  by an unknown assailant who invaded Zylofon FM’s premises.

According to him, the masked man forced his way into the studios and threatened to kill him. But for the intervention of police, he would have been a dead man.