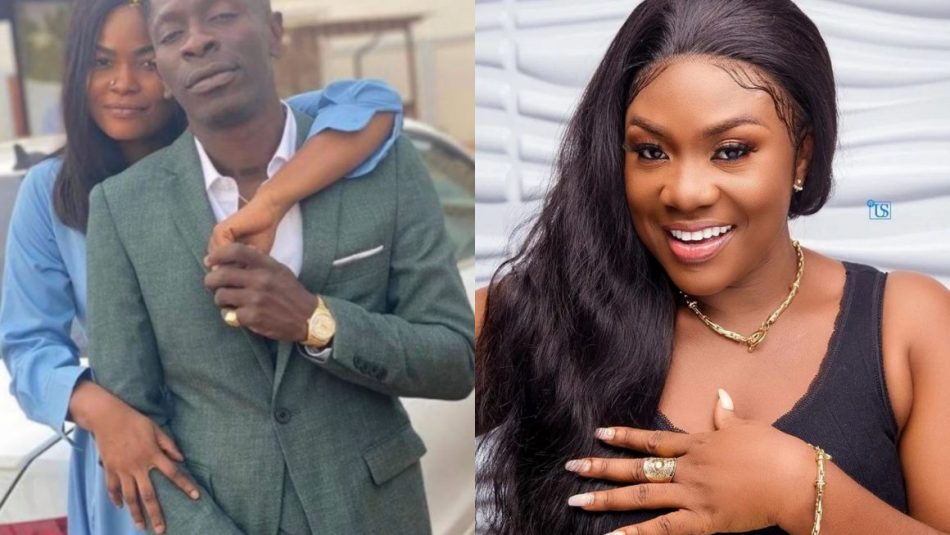 Shatta Wale’s self-acclaimed girlfriend Magdalene Love Nunoo has apologised to Emelia Brobbey for defaming her. This comes after Nicolas Soriyi, lawyer for Emelia Brobbey served Magdalene a notice to retract her recent claims.

Magluv, as she’s known, Magluv claimed Emelia Brobbey once had a relationship with Shatta Wale!

The notice from lawyer, Nicolas Soriyi said Magluv  published to the viewing public both within and without Ghana several unwarranted, unfounded and malicious publications against Emelia Brobbey  both in English and twi languages interpreted in English to mean that:

a.     Our client has had an amorous relationship with Charles Nii Armah (affectionately called Shatta Wale), a popular Dance Hall King musician. In that video, you claim our client had sex with Shatta Wale while one Diamond Michelle Gbagonah (Popularly called Shatta Michy) was still in a relationship with him (Shatta Wale). A claim which imputes that our client has an immoral character, an irnputation which you at the time knew or ought to have known to be a complete falsehood and yet went ahead to publish same just to cause public disaffection for our client and to reduce her standing in the eyes of the public. 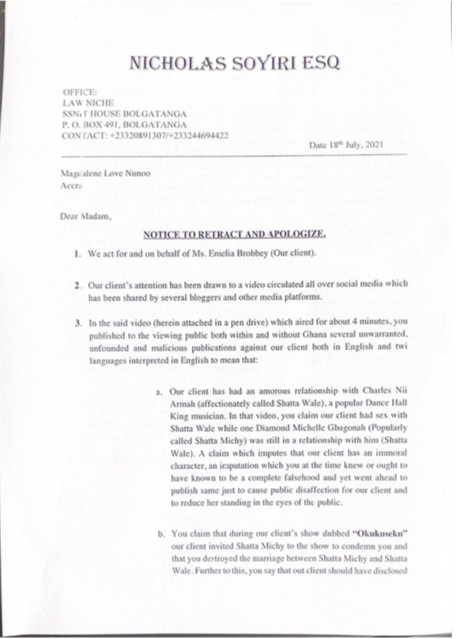 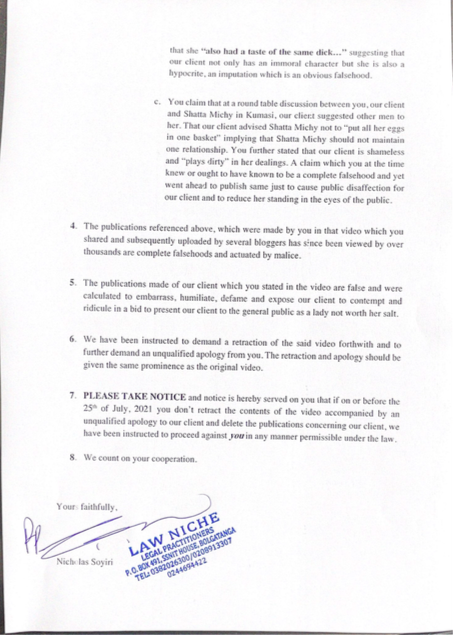 b.     You claim that during our client’s show dubbed “Okukuseku” our client invited Shatta Michy to the show to condemn you and that you destroyed the marriage between Shatta Michy and Shatta Wale. Further to this, you say that out client should have disclosed that she “also had a taste of the same dick… suggesting that our client not only has an immoral character but she is also a hypocrite, an imputation which is an obvious falsehood.

c.     You claim that at a round table discussion between you, our client and Shatta Michy in Kumasi, our client suggested other men to her. That our client advised Shatta Michy not to “put all her egos in one basket” implying that Shatta Michy should not maintain one relationship. You further stated that our client is shameless and “plays dirty” in her dealings. A claim which you at the time knew or ought to have known to be a complete falsehood and yet went ahead to publish same just to cause public disaffection for our client and to reduce her standing in the eyes of the public.

The notice also stated that:

“We have been instructed to demand a retraction of the said video forthwith and to further demand an unqualified apology from you. The retraction and apology should be given the same prominence as the original video.

“PLEASE TAKE NOTICE and notice is hereby served on you that if on or before the 25 th of July, 2021 you don’t retract the contents of the video accompanied by an unqualified apology to our client and delete the publications concerning our client, we have been instructed to proceed against you in any manner permissible under the law.”

In a lengthy post on her social media pages, she expressed her sincerest apologies to all she tainted in her one-woman crusade against Michy.

She apologised to Emelia Brobbey, Becca and even Shatta Wale’s mother.

“A few weeks ago in my quest to tell my truth after soo many years of silently taking the blame for situations I had no hands in. I unfortunately involved and offended a couple of people.

“So I would like to use this opportunity to render a heartfelt apology to Ms. Emilia Brobbey and Becca. I’m sincerely sorry for involving u in an issue that ordinarily u guys shouldn’t have been involved in. I hv soo much respect for u and the contributions you guys have made to the entertainment industry.” she said.